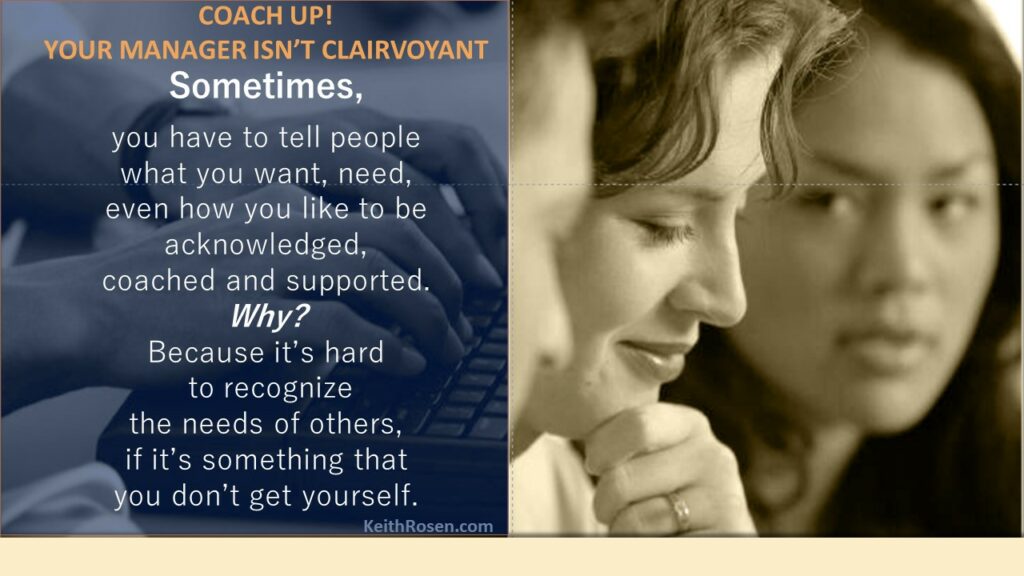 WHAT EXACTLY IS COACHING UP? Do you support your manager the way you expect them to support you?

I was speaking with Marco, a senior VP. He was sharing with me how he wasn’t getting the coaching & direction he needs from his manager to succeed in his new role.

While this VP’s intention was positive, in every conversation, Stephan, his boss, made him feel less & less competent & spent most of his time badgering him about his performance, commitment & results.

“I’ve been dealing with this for 8 months since my promotion,” Marco said. “In my prior position, he was not only my manager but a good friend. Now it seems ever since I’ve been promoted, our relationship has changed for the worse & I don’t know why.

We even played golf together & he spent the whole time berating me.”

“What else did the conversation sound like?” I asked.

Marco thought for a second & continued. “Now that I think about it, he also made comments like, “I want things to go back to where they were,” & “I have a ton of pressure to hit our goals.”

“It sounds like during your conversations, in his way, he was sharing his challenges, worries & desire to improve your relationship. What have you tried so far to address this?” I inquired.

I’ve been telling Stephan this isn’t working for me & I’d love a clear direction of what we’re trying to achieve & my responsibilities in my role,” Marco replied.

“What if, the next time you approach Marco, rather than make it about you, what if you made it about him?”

“I never looked at it that way” Marco reflected. “I guess I wasn’t paying attention to all the clues he left me because I was so focused on what I needed, I never considered the pressure and strain he’s under.

And here I am eight months later, hoping our relationship would change for the better.”

I then shared. “If your manager isn’t getting what they need to succeed from their boss, it’s very difficult for them to recognize what others need. It sounds as if, in some way, he is asking for help.”

“That sounds like the next conversation I’m having with Stephan!” Marco said with renewed energy & a sense of new possibilities he can create in their relationship.

The lesson: Care, coaching & support go both ways. It’s the law of reciprocity. If you want to get what you need, first help others get what they need.